Note: Unless otherwise indicated, I will be using “anathema” in the way the Orthodox and Roman-Catholic Church use it. That this is not in agreement with the Biblical usage of the word “anathema”, by the apostle Paul, will be shown at the bottom of this page. 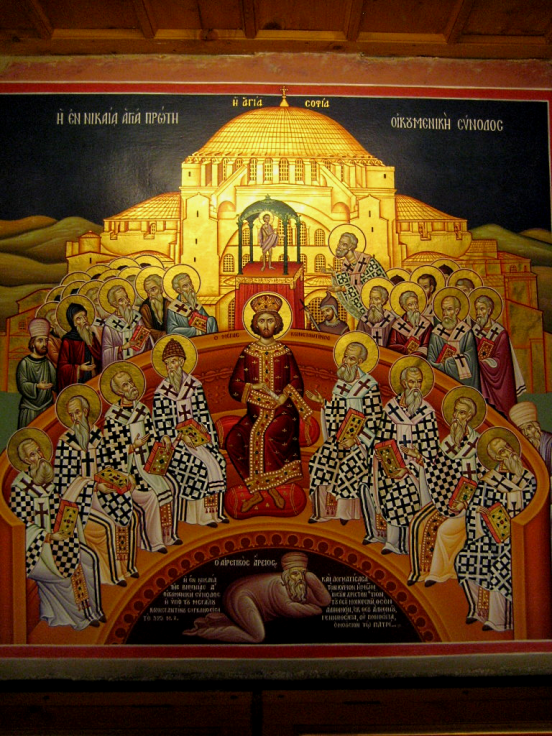 “The Council of Nicaea, with Arius depicted as defeated by the council, lying under the feet of Emperor Constantine.” Picture source: wikimedia, Quote source: wikipedia

“Icon depicting the Emperor Constantine and the bishops of the First Council of Nicaea (325) holding the Niceno–Constantinopolitan Creed of 381.” Picture source: wikimedia, Quote source: wikipedia

A reason why I cannot fully agree with the (eucumenical) councils is because they include anathemas. What such anathemas mean will be explained below.

An example of such an anathema is: 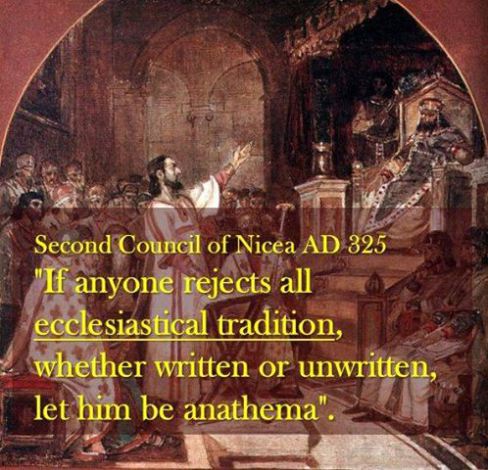 ‘At an early date the Church adopted the word anathema to signify the exclusion of a sinner from the society of the faithful; but the anathema was pronounced chiefly against heretics. All the councils, from the Council of Nicæa to that of the Vatican, have worded their dogmatic canons: “If any one says . . . let him be anathema.”‘
Source: Newadvent

Such an anathema can become a very drastical, ritualistical expression, as can be seen in the “bell, book and candle” ritual:

‘The phrase “bell, book, and candle” refers to a Latin Christian method of excommunication by anathema, imposed on a person who had committed an exceptionally grievous sin.

The ceremony traditionally involved a bishop, with 12 priests with candles, and is solemnly pronounced in some suitably conspicuous place. The bishop would then pronounce the formula of the anathema, which ends with the following words, in English:

Wherefore in the name of God the All-powerful, Father, Son, and Holy Ghost, of the Blessed Peter, Prince of the Apostles, and of all the saints, in virtue of the power which has been given us of binding and loosing in Heaven and on earth, we deprive him and all his accomplices and all his abettors of the Communion of the Body and Blood of Our Lord, we separate him from the society of all Christians, we exclude him from the bosom of our Holy Mother the Church in Heaven and on earth, we declare him excommunicated and anathematized and we judge him condemned to eternal fire with Satan and his angels and all the reprobate, so long as he will not burst the fetters of the demon, do penance and satisfy the Church; we deliver him to Satan to mortify his body, that his soul may be saved on the day of judgment.

The bishop would then ring a bell, close a holy book, and he and the assisting priests would snuff out their candles by dashing them to the ground.’
Source: wikipedia

But it can also become very drastical in a tyrannical way:

“He who dares to despise our decision, let him be stricken with anathema maranatha, i.e. may he be damned at the coming of the Lord, may he have his place with Judas Iscariot, he and his companions. Amen.”
– Benedict XIV (1740-58–De Synodo dioecesana X, i). (Originally formulated by the “fathers” of the Fourth Council of Toledo.)

So with all the differences I have with the Roman-Catholic (or Orthodox) Church, I would be anathema a 1000 times, which, we could say as a way of speech, would make me burn a 1000 times worse than Judas Iskariot, according to this pope. If this is the will of God the Father or the Lord Jesus Christ, let it be so. But happily, nowhere is such nonsense stated in the Bible. The Bible uses the term “anathema” strictly only in the following occassions:

NOT ONCE does a Christian in these verses put a curse on a specific person.

The worst biblical anathema in the New Testament seems to be the following verse:

and the reason is FORNICATION! (1 Corinthians 5:1) Such sins are clearly forbidden in the Bible. It is about the excommunication of those who persevere in a certain sin. Perseverance in a certain sin must result in excommunication out of the Christian church (and out of the spiritual body of Christ, read Conditional Security | notice that this verse seems to indicate that one can return) it is NOT about not agreeing with a certain post-biblical creed or council!

The apostle Paul used another anathema:

“If any man love not the Lord Jesus Christ, let him be Anathema Maranatha.” (1 Corinthians 16:22).

Notice that it is only used on certain types. It is never used on a specific person. Notice also that this verse only says that whether a person Loves Jesus Christ, at the Lord’s second coming, or at the death of the specific person,  will decide whether he or she will make it to Heaven. It is about the excommunication of those not loving Jesus Christ. It seems to be pointed towards false imposters (gnostics?). Not against individuals who love Jesus Christ but disagree with extrabiblical content which came only later.

I like to stick to the Bible, as not to be anathema before God (we have just studied the example of 1 Corinthians 5:1), even if that means being anathema before the pope or the Roman or Orthodox Church.

This is what I try to do:

“Contend earnestly for the faith which was once for all delivered unto the saints.”
– Jude 1:3b (ASV)

The first anathema of the church I would receive because I do not agree with putting an anathema, in the modern sense of the word, on certain decrees, which where sometimes totally not agreed upon by (the majority of) Christians in the centuries before. We have for example the difference between the Orthodox and Roman-Catholic Tradition (papal infallability, filoloque, original sin,…), the antipopes versus the popes (which was more politics and jealousy than anything else), burning heretics (which pope Leo X condemned in proposition #33 of his papal bull “Exsurge Domine“, the fraud of Augustine against Pelagius (on this topic I will write more soon) and extreme emphasis on the veneration of Mary and other saints (Read Erasmus’s “Naufragium” in Solus Christus).

Most importantly, I believe that the Lord Jesus Christ Himself would not have agreed upon the post biblical usage of the word anathema, as a curse for disagreeing with a certain post-biblical doctrine. He stated: