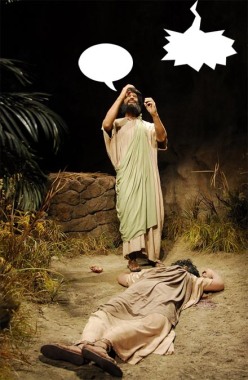 ‘It is not as if I (or any Traditionalist who agrees with me on this point) attempts to say that mankind’s ability to respond to the Holy Spirit wrought gospel is of my own making (like I went out into my tool shed and built a nature that was capable of willingly responding to God). Instead, it is a common ability built in us by our Maker, who created in His own image (this image, though marred*, was graciously preserved even through the Fall…at least there is no biblical reason to think it was lost, as far as I can see). God was not required to create within us this ability, nor is He obligated to exercise His patience with us in waiting for us to exercise that ability (2 Pet. 3:9).  He could have justly allowed each of us to suffer the immediate life-terminating consequences of our first sin.

At this point, the differences between William**’s position and my own seem to be inconsequential. He argues that God supernaturally intervenes (by a work of “prevenient grace”) to grant all of fallen humanity an ability they supposedly lost in the Fall of Adam (something never explicitly or implicitly suggested in scripture as far as I can tell). Whereas, I believe God graciously preserved our human responsibility (the ability to respond) to God’s graciously revealed truth by letting us live, even though He had every right to simply destroy us.

In other words, the hair being split is God’s “common grace” in preserving man’s life and thus his God-given ability to respond willingly to His own word–versus God’s “prevenient grace” in supernaturally restoring man’s lost ability to respond willingly to His own word. I hardly see why any scholar would make the conscience effort to label one of these perspectives a “heresy” (Semi-Pelagian) in defense of the other.

The question is whether or not Adam and Eve had the moral/spiritual ability to heed and respond willingly to God’s audible voice. Clearly they did, as they put on the clothes He provided to them (Gen. 3). We also see the responses of Cain and Able to the voice of God; followed by the subsequent rewards and punishments (Gen. 4). Thus, the question is why do some believe mankind is able to respond willingly to God’s audible word, but not His inspired word?  Both are made abundantly clear (able to be physically heard/read).  I can find no clear distinctions drawn in the text between mankind’s moral/spiritual ability to heed God’ word if revealed by different means (audible vs inspiration).

Notice the subtle difference between the Holy Spirit using the means of the gospel to empower the hearer to respond willingly, versus the Holy Spirit empowering the hearer through some other unknown hidden inward means (a “prevenient grace,” never expounded upon in the Bible) so that the means of the Gospel would become sufficient to enable a willing response of an otherwise incapacitated fallen person.  Do you see the difference?  The Arminian insists on the Holy Spirit’s use of two separate means of grace (the gospel and this so-called “prevenient grace”), whereas I contend the Bible only speaks of one (the gospel). Why? The Arminian assumes (without biblical warrant IMO) that the fallen person has become incapacitated to respond willingly to God Himself.

The author of Hebrews appears to be one of those people who insists the Gospel, God’s inspired word, does work inwardly within the sinner:

“For the word of God is alive and active. Sharper than any double-edged sword, it penetrates even to dividing soul and spirit, joints and marrow; it judges the thoughts and attitudes of the heart” (Heb. 4:12).

This penetrating work into the “soul and spirit” sounds like the work of “prevenient grace” described by William, yet the author simply refers to “the word of God” as accomplishing this work, not some extra working of grace that aids the otherwise incapacitated nature of fallen man.

Here are two other passages that seem to teach that the scriptures, God’s inspired word, are sufficient even even for the lost:

“…you have known the Holy Scriptures, which are able to make you wise for salvation through faith in Christ Jesus. All Scripture is God-breathed and is useful for teaching, rebuking, correcting and training in righteousness” (2 Timothy 3:15-16).

“Consequently faith comes from what is heard, and what is heard comes through the preached word of Christ” (Rom. 10:17).

The Early Church Fathers likewise seemed to agree with this understanding:

Irenaeus, (130-202) wrote, “We have known the method of our salvation by no other means than those by whom the gospel came to us; which gospel they truly preached; but afterward, by the will of God, they delivered to us in the Scriptures, to be for the future the foundation and pillar of our faith,” (Adv. H. 3:1)

Athanasius wrote, “The Holy Scriptures, given by inspiration of God, are of themselves sufficient toward the discovery of truth.”

It seems incumbent on William, and those who agree with him, to provide evidence that the Holy Spirit inspired scriptures, apart from an extra inner work of grace, are insufficient to enable the lost to respond willingly.

Given that not everyone repents and is saved once ‘freed’ on William’s view, would he have us believe there may be a lost person who is “freed from her bondage to sin,” but still remains in sin’s bondage? I’m not sure how one could rightly speak of those under the wrath of God in sin as being “freed from sin” in any sense.  It appears to me that those spoken of in scripture as being “freed from sin’s bondage” are specifically those who have already believed and been reborn.

William would have to argue that God frees all people from the bondage of sin (at some undisclosed time and in some mysterious way never revealed by the text), while only some individuals actually repent of sin—leaving the rest under sins curse while still “freed from sin’s bondage.” I find this view untenable.

Our view is far less complex. Mankind is freed from the bondage of sin by confessing that they are in bondage (admitting their inability to save themselves) and in faith trusting God to free them. Upon confession, Christ graciously steps in to provide freedom and salvation. It seems like William gets the cart before the horse to suggest that one has to be “set free from sin’s bondage” in order to even humbly admit they are enslaved by sin’s bondage.

William’s mistake (like that of the Calvinist) is assuming that the biblical reference to mankind’s being “bound in sin” equals mankind’s inability to see and confess they are in that condition even in light of God’s clear revelation.  In short, acknowledging that someone is trapped in a jail cell does not mean that the one trapped cannot see that he is trapped and admit his need for help in order to gain freedom.

John 8:32 says, “you will know the truth, and the truth will set you free.” Truth, once known and accepted, will set you free.  One is not set free so as to respond freely to truth, as William presupposes. Again, it would be difficult to defend a belief that sinners who remain in unbelief and under sin’s bondage all their lives can ever be described as “freed from sin’s bondage” in any meaningful sense.

For instance, can he demonstrate that the Israelite audience of Jesus in John 6 were incapable of coming to Him while he was “down from heaven” because of an innate disability imputed to all humanity as a natural consequence of Adam’s sin, rather than a calloused condition of Israel due to their own libertarianly free choices (which God is judicially giving them over to, so as to accomplish a greater redemptive purpose; Acts 28:27-28; John 12:39-41; Mark 4:11-13; Rom. 11)?

An analogy for consideration:

Now, if the “Authoritative Carpenter’s Manual” clearly indicates that nails cannot be driven by the hammer apart from the application of oil, then by all means, I would concede this point. But if the manual never even mentions anything about oil at all, but over and over again points the hammer as the sole means of power and sufficiency for driving nails, then why add the additional oily means? (Of course I understand that William, and other scholars, do interpret certain texts to mean that the “oil is necessary” whereas I simply do not see it.)’

source: Leighton Flowers, “Why I am not an Arminian” (soteriology101).

* The author of crosstheology does not believe that the image was even marred. The image is, in his opinion, fully intact. Read this post for more information.