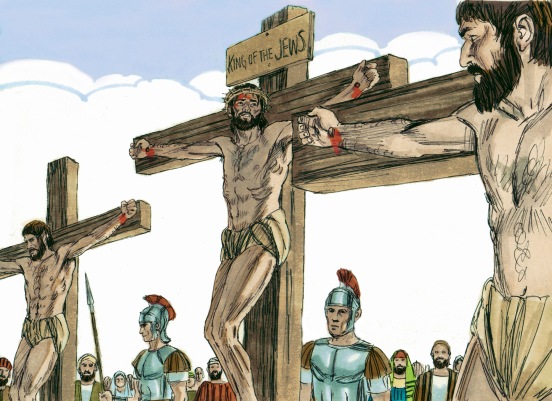 Romans 8:3b “(…) God sending his own Son in the likeness of sinful flesh (…)”
seems to be one of the favourite proof texts for “modern-day gnostics”.

Below I will give my interpretation of this verse, in its context.
It is important to read the verses that have been referred to, between brackets and to follow the colour codes
I believe that my interpretation is more in line with the early true Christians.

At the bottom of the page I will add some links to proof that I did not just make up the stuff about the gnostics etc.

Romans 8:2: For the law of the Spirit of life in Christ Jesus: We are allowed to partake in his resurrection (-> Romans 6:4-5)
hath made me free from the law of sin and death: We have been set free from having to sin due to our addiction to sin, which we brought upon ourselves (-> Romans 6:7-10, possibly Galatians 4:31-5:1)
Romans 8:3: For what the law could not do, in that it was weak through the flesh: The law was “strong” in warning us, in persuading us not to sin.
But once “weakened by the flesh”, weakened because we have committed a sin (and the following addiction to sin) / alternatively: The warning function was weakened by sinful humanity. (Genesis 6:12-13: These verses prove that the human race itself chose to “corrupt his ways”. This cannot be explained through the gnostic concept that the flesh (substance of the body) was corrupt, since Noah was not corrupt and he was in the same flesh as his contemporaries as well as ALL his descendants. Thus it follows that every individual chose to corrupt his ways and that, contrary to what the gnostics taught, the substance of the body was not to be blamed. Read also 1 Peter 1:18.)
God sending his own Son in the likeness of sinful flesh: God, in Jesus, became fully human.
“in the likeness of sinful flesh“: He went to the cross in the likeness of a criminal, although He was innocent. As it is written: “(He hath poured out his soul unto death: and) He was numbered with the transgressors.” (Isaiah 53:12b, emphasis mine)
“and for sin, condemned sin in the flesh“: “and He bare the sin of many, and made intercession for the transgressors.” (Isaiah 53:12b), “The LORD hath laid on him the iniquity of us all.” (Isaiah 53:6b), Who His own self bare our sins in his own body on the tree, that we, being dead to sins, should live unto righteousness: by whose stripes ye were healed” (1 Peter 2:24, emphasis mine) therefore we may know that: “that our old man was crucified with him, that the body of sin might be done away, that so we should no longer be in bondage to sin.” (Romans 6:6(b), RV)
CONCLUSION: “For he that is dead is freed from sin.” (Romans 6:7, emphasis mine),
Thus follows: “Likewise reckon ye also yourselves to be dead indeed unto sin, but alive unto God through Jesus Christ our Lord. Let not sin therefore reign in your mortal body, that ye should obey it in the lusts thereof. Neither yield ye your members as instruments of unrighteousness unto sin: but yield yourselves unto God, as those that are alive from the dead, and your members as instruments of righteousness unto God. For sin shall not have dominion over you: for ye are not under the law, but under grace. ” (Romans 6:11-13,14 (emphasis mine), compare this verse to Romans 8 verse 2)

“For ye were as sheep going astray; but are now returned unto the Shepherd and Bishop of your souls.” (1 Peter 2:25, emphasis mine).

An interesting quote by Albert Barnes is:

“He was suspended on a cross, as if he had been a malefactor. He was numbered with malefactors; he was crucified between them; he was given up by God and man to death as if he had himself been such a malefactor. In other words, he was put to death in the same manner as he would have been if he had been personally guilty of the violation of the law. Had he been a thief or murderer, had he committed the grossest and blackest crimes, this would have been the punishment to which he would have been subjected. He consented to die in the same manner as the vilest malefactor, in order that by his substituted sorrows he might save those who were personally guilty. The idea which makes the atonement so wonderful–the idea which makes it an atonement at all–is, that innocence was treated as if it were guilt; that the most pure and holy and benevolent being on earth was treated AS IF he had been the most vile and ill deserving.”
– Albert Barnes, The Atonement (1860), Chapter 8: Confirmation of These Views of the Nature of the Atonement from the Bible, p. 296.

Proof which shows the difference between how true Christians saw the flesh and how gnostics saw the flesh; this debate between Archelaeus (early church father, defender of important truth, including the freedom of the will) and Mani (founder of the Manichaean gnostic movement):
“The Acts of the Disputation with Manes” (by Archelaeus, digitized by Kevin Knight) [Upate: this might be a fictuous work but one can read the following quote:

‘Let the learned Greeks say that the human soul at its birth is placed under the charge of demons: Jesus has taught us not to despise even the little ones in His Church, saying, “Their angels do always behold the face of My Father which is in heaven.”‘
– Origen, Contra Celsus, Book VIII, chapter XXXIV

You can also read “Pelagius’s Commentary on Romans” (digitized by an anonymous user) for an honest interpretation of what flesh means, which is, as far as I can see, in line with the early church fathers (contrary to gnostic Manichaean heretic Augustine, who falsely accused Pelagius of teaching certain heresies which he did not teach, while teaching Manichaean heresies like the Manichaean view on original sin).

Please check out also this article explaining what a “sinful nature” really is.

And this article explaining why sin is not natural.

“To understand Paul’s anthropology in the Greek New Testament, it is necessary to avoid the dualistic anthropology of the Greeks, with its clear distinction between soul and body, and view his writings through the lens of the Hebraic frame of references, in which sarx (flesh) and psyche (soul) both denote the whole living person and not merely any part of of the individual. (…) In the Greek view (dualism), the body is evil but the spirit is good. In the Hebraic view, the whole person (spirit and body) is good.”
– James DeFrancisco, “Original Sin and Ancestral Sin, Comparative Doctrines”

All Scipture verses except for Romans 6:6 taken from the King James Version (KJV). Public domain (copyright the British Crown in the UK).
Romans 6:6 taken from the Revised Standard Version of the Bible, copyright © 1946, 1952, and 1971 the Division of Christian Education of the National Council of the Churches of Christ in the United States of America. Used by permission. All rights reserved.